TRENDING NOW
Home Culinary Cooking All About That Toast 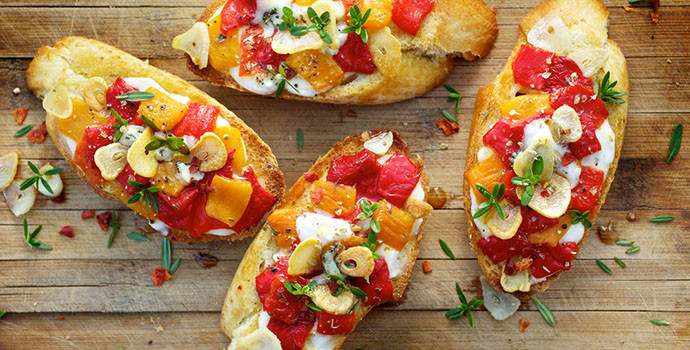 All About That Toast

AAvocado, apple and cheddar, lemon curd and ricotta cheese, bacon jam, caramelized onions and sage. The list goes on and on for the new and exciting frontier of toast-making. It seems unlikely that something that actually predates sliced bread becoming the new en vogue trend for foodies and chefs alike but there’s something to be said about the simple perfection and the nearly infinite combinations that the formula of toasted bread and whatever the heart desires can produce. Toasts have even been graced in other publications Food Network Magazine recently added a massive 50 possibilities for toast-topping fun.

The origins of this year’s toast trend start off small, with the ever present avocado toast that took social media by storm last year. Avocado toast became very popular with home chefs looking for a quick post/pre-workout snack and cleverly placed fresh slices of ripe avocado on toasted bread seasoned simply with salt and pepper and the new twist on an old classic quickly became a sensation. Filtered photos of the bready concoction flooded social media accounts and the new toast renaissance began.

Slowly but surely newer variations on old classics evolved and before the food world knew it, toast really had become the best thing since, well sliced bread. The new and reinvented toasted bread-based possibilities didn’t stop in the home kitchen and it wasn’t long before commercial operations began totake advantage of the new opportunities brought on by this new versatile epicurean delight. And while some restaurants opened up one or two toast options on their menus, a new dining spot in Australia promises to be one of the first toast cafes to open in the world hoping to ride the coattails of success that followed other dining establishments with very specific specialties.

Toasts are fantastic because of their versatility. They are fantastic ways to use up ingredients before they pass their prime in the way gratins and casseroles were once used. Toasts also can make ingredients that by themselves may not create a satisfying meal into a hearty dish that works well for any time of day: breakfast, brunch, lunch or dinner. Toasts are applicable to all appetites; they work well as both sweet and savory or a combination of the two if team Salty-Sweet is the desired effect. Toasts act as a blank canvas, they are like many other kitchen staples nearly boundless in applications thus providing that toast can be a delicious treat without being dipped in custard and covered in syrup (though still a more than acceptable way to take in toast).

Even though toasts have taken the professional food world by storm, the most interesting product of the 2015 Toast Craze has been making great recipes accessible to home cooks. There is something simple about a solid toast dish and even the most novice of home cook is unafraid of a recipe consisting of two or three ingredients and steps that begin with “toast bread”. It allows for a creativity and openness in the kitchen and there is no right or wrong. There is no limit to the toppings and the bread choices just add another layer of flavor and fun to whatever they will play host to. Have brioche on hand? Perfectly fine. Sourdough is great, too. Bacon and Nutella? Great! Brie and raspberry jam? Fantastic! Avocado and a fried egg? Sounds divine. So get out there and toast!

Get Social With Us